As you no doubt know there has been and is a huge amount of difficulty and problems in East Africa. These problems are not only the cause of on-going conflict and mismanagement, but the addition of one of the worst droughts in the countries history. Though the relatively recent rains may have eased the drought at least, the problems continue and the on-going, compassionate work of groups and organisations bringing much needed aid to the affected areas are essential. 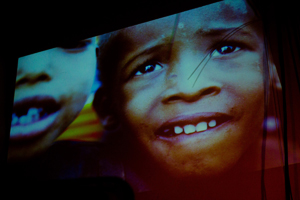 We chose to do what little we can with our small organisation, network and fan base to arrange and promote a charity event to do our best to raise as much money as possible for Médecins Sans Frontières MSF (Doctors Without Borders), who bring medicines, food and aid to people in need across the globe, and who ensured that any money raised would go to fund their work in some of East Africals worst affected areas.

Finding venues suitable for our event and forward thinking and thoughtful enough to support this course might have been a problem, however the relatively recently re-opened Platt Chapel, Fallowfield, under new management were the best hosts we could have wished for, supporting us and our event’s main focus though and though. The space was prefect for us to build an ambience and to set the scene for an evening of entertainment for one and all to enjoy. 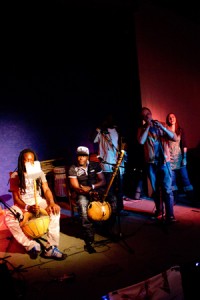 Kicking off the event was our close friends Simon McCarthy, Holly Marland, Jonny Hodgkinson and Erica McCarthy, delivering a kora, fiddle, and percussion fusion set for our guests to arrive to.  Next, a special ensemble led by Sidiki Dembele and Vieux Bakayoko on traditional African string instruments ngoni and bolon, and supported by Baba Galle Kante (flute), Iya Sako, and Mobe Camara (djembe).

We chose this moment for MSF representative, Aisha Dodwell to deliver her presentation. The energy in the room before this point had been getting uplifted in the music, but Aisha’s talk and video presentation was very moving, educating the audience why we were hosting this event and where their money was going, allowing people a moment reflect.

UK debutants, Maitre Samsou and The Beat Artists were next; Profiling the much-anticipated product of many months of hard work in secret rehearsals. They delivered one of the biggest acoustic sounds you're likely to hear with tight, powerful ballet styles and complex arrangements, as taught and orchestrated by Samsou.

Only one thing remained on the night before the final act 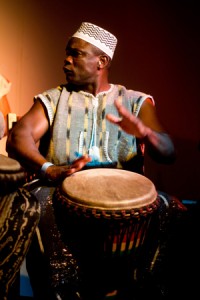 could take to the stage; the raffle. Through our friend's generosities, this was no ordinary raffle, the prizes were something else and saw us calling audience members out to claim prizes from cases of wine to custom made t-shirts (by one69a), to professional djembes and £500 African flight vouchers!

The final act was our very own Tanante, with the biggest line ups of guest artists here to up the power and bring their flavour to our stage; appearing with us was our new dance troupe performing choreographed dance routines by Helen Temperly, Carolina Corral and Constance Laisne, plus special guest African artists Mobe Camara, Vieux Bakayoko, Baba Galle Kante, Sidiki Dembele and of course Iya Sako.

Taking care of things throughout the night on stage and behind the scenes was Andy Garvey on the sound desk, DJ Sir Robin on decks and Dave Ruffmouth and Bels on the microphone comparing. 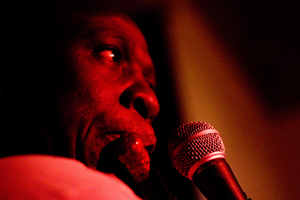 All of the above; crew, bands, artists, dancers, Platt Chapel staff, people who allowed us the use their equipment, contributors to the raffle (Barbra, Sally, and Marie from Kontaani), plus photographers and film crew gave their time, resources and energy for free to help us build this special event and to raise the grand total (just shy of a grand!) of £950.08, which has been transferred to MSF already.

As well as the hard work of everyone involved in the night, a massive thank you to every one of you who came along to share this with us, enjoyed the acts, bought raffle tickets, danced to the music, and supported the performers. Please follow links from this page to the artists and organisations websites to see what they do, tell your friends about this blog post and please leave comments below, feedback makes us happy.

Click here to see a small selection of the photographs from Drumroots Live! (photo’s by Ric Lowe and Tasha Whittle )

2 Responses to Proceeds from Drumroots Live £950.80 go to MSF! (Photos and Video)