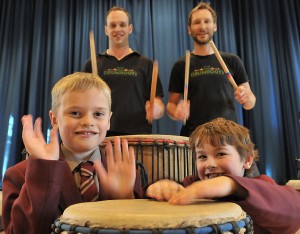 Drumroots team recently enjoyed a day at the wonderful Altringham Preparatory School for Boys. Running exceptionally large classes with children can at times be a challenge but not with this group of attentive young people! The groups of fifty odd enthusiastic and eager participants had a real buzz about them as we got into the sessions, and they gave us really excellent attention and energy. From time to time the sessions were visited by various members of school staff, including the head teacher and some of the school governors who were all drawn to space to observe the enjoyment that the children were taking from the session and the positivity and joy they were putting back in. Many thanks to Altringham Preparatory School, especially to Teacher Naomi Kayayan who arranged the sessions and who had attended one of our previous workshops with Special Virtuosi. The Altringham Preparatory workshop was attended by local press as well receiving a write up in the school’s online newsletter complete with video, follow this link to visit the article or see below for what they had to say:   VIDEO:DRUMMING WORKSHOP FOR YEARS 3 AND 4 11 March 2014 Altrincham Preparatory School boys got into the beat when they learned to play a set of 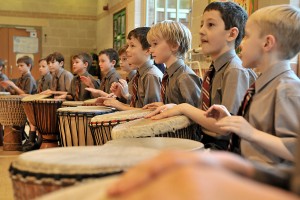 West African drums on a day devoted to the rhythm of life. The top independent school on Marlborough Road, Bowdon pulsated with the ancient rhythms of the djembe drum kits as boys learned a series of complex multi-part rhythms. Popular in countries such as Guinea, Senegal and Sierra Leone the djembe drum was a traditional animal skin drum with different variants seen all over the world. Run by the Manchester drumming collective Drumroots, the day not only saw skilled drummers teach basic technique and how to work in unison but also the global history of drumming. Drumroots Director John Tullo said: “Drums are mankind’s oldest and most basic instrument and have been used in celebration for 60,000 years. They are a vital part of culture and essential to ancient story telling where history was passed down in ritual and music rather than by pen and paper.” John added: “They also enabled different villages to communicate and warn each other of impending danger with their own simple but vital language. Drums now of course, are also a key part of any modern orchestra.” APS Head of Music Miss Naomi Kayayan was delighted to host the day: “It is often said that great drummers are born and not made and this experience allows boys to discover if they have natural talent for something they might never have tried.” Altrincham Preparatory Headteacher Andrew Potts, added “We are not normally too enthusiastic about excessive noise, but we were happy to make an exception for the school drumming day. It provided the boys with an exciting and fun physical, intellectual and team-working challenge.” Pictured are Lucas and Max. 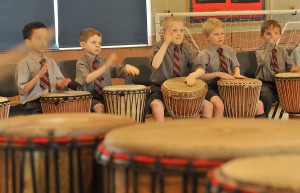 Today, the boys in years 3 and 4 were treated to wonderful African drumming workshops hosted by ‘Drumroots’. The year 3 music project this term has been based around African songs and rhythm building. The year 4 topic has been improvisation in a number of styles from Blues to World Music. Miss Kayayan, Director of music said: “The visit from Drumroots today was timely, as the boys have been working on spontaneous music making this term and have had a great time developing performance skills and immediate responses”. All of the boys involved today had an incredible experience with the opportunity to play their own 'Djembe' drum, which it is hoped will provide a lasting memory for years to come. Boys learned about Djembe drumming traditions from West Africa in addition to a number of novel improvisation techniques. Miss Kayayan added: “It was wonderful to see the boys working together on such a large scale project and having so much fun at the same time!” Further information about Drumroots can be found here: http://www.drumroots.org.uk 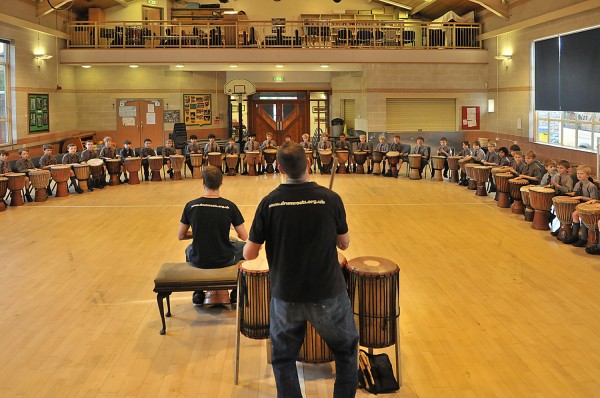